The Town Council passed resolution 100-2019 at the 12/6/19 Council Meeting in regards to the windfarm project.

The Town of Ocean City has provided information to us in regards to the windfarm:

Members of Fenwick Island Town Council stated at the October 25, 2019 Council meeting that they were not in support of the plans for the Fenwick Island State Park as presented.

Some members expressed frustration that Fenwick Island was not given an opportunity to have input about the proposed plans.

On November 5, 2019, Mayor Langan requested the support of the Association of Coastal Towns (ACT) in seeking information and input to the proposed plans.  ACT voted to support our efforts.

Through discussions with Senator Hocker and Representative Gray, an informational workshop was held on November 19, 2019.

We have requested ACT to sign a letter to Secretary Garvin with questions and concerns about the projects.

For more information in regards to the proposed changes, please visit destateparks.com/FenwickImprovements or call Matt Ritter at 302-739-9187.

The Town has sent DNREC, along with State and County representatives, a letter in opposition.  In reply to the letter, Senator Hocker and Representative Gray will be holding a meeting on November 19, 2019 at 6:00 PM. 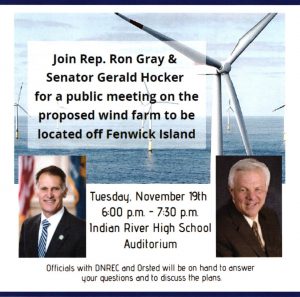 Any correspondence in regards to this project should be sent directly to the following: