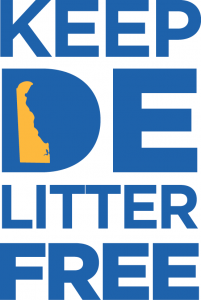 Joined by local leaders, members of the General Assembly, and advocates, Governor John Carney on Tuesday launched the “Keep DE Litter Free” initiative, a campaign to reduce litter across Delaware.

“If you’re like me, you notice litter everywhere – in trees, on highway ramps, and along roads in all three counties,” said Governor John Carney. “When I took the oath of office to become Delaware’s 74th Governor, I pledged not only to uphold our Constitution, but to ‘respect the right of future generations to share the rich historic and natural heritage’ of our state. From Trap Pond in Laurel to the Brandywine Creek in Wilmington, we live in a beautiful state, and we should take care to preserve that heritage. That’s why, in partnership with Keep Delaware Beautiful, we have launched a statewide campaign to encourage all Delawareans and visitors to not litter, to respect our natural heritage, and Keep DE Litter Free.”

A 2018 study from Keep Delaware Beautiful and the State of Delaware identified more than 6,000 pieces of litter for every mile of Delaware roadway surveyed. Cigarette butts, plastic bags, aluminum cans, and glass bottles accounted for a significant percentage of the roadway trash. Governor Carney also is supporting legislation, sponsored by Representative Gerald Brady, to ban single-use plastic bags in Delaware.

“In addition to negatively impacting the appearance of our state and the environment, reckless littering also causes us to devote significant time and man power to cleaning it up,” said Jennifer Cohan, Secretary of the Delaware Department of Transportation. “We have men and women risking their lives on our roads picking up trash that careless people just toss out their windows. It’s just not acceptable.”

“Littering and illegal dumping have become a growing problem statewide impacting our lands and waterways,” said Shawn M. Garvin, Secretary of the Delaware Department of Natural Resources and Environmental Control. “Governor Carney’s ‘Keep Delaware Litter Free’ campaign will help to raise awareness and challenge all of us to clean up Delaware. DNREC will use our authorities to support this effort.”

“We are excited about the launch of the Keep DE Litter-Free initiative the Governor unveiled today. Every Delawarean can play a role in helping to Keep Delaware Beautiful by committing to do their part,” said Julie Miro Wenger, Executive Director, Keep Delaware Beautiful. “We hope to help change behavior. We appreciate the commitment and partnership with the Governor, his administration and the legislature.”

“Delaware is home to a variety of natural treasures, with my community contributing miles of pristine, award-winning beaches and the historic horseshoe crabs that inhabit them. Littering pollutes that beauty and threatens our wildlife and nature,” said House Speaker Pete Schwartzkopf. “It’s up to all of us to take action to keep our communities clean. Governor Carney’s initiative will help raise awareness of the dangers of littering and encourage residents to make a sustainable, substantial difference.”

“We have to bring back into our social consciousness that littering is disrespectful not only to our environment, but to our state and our country,” said Senator Stephanie Hansen. “Littering sends the message that ‘I don’t care about this place’ and that’s unacceptable.”

“Litter negatively impacts our tourism industry, harms the environment, and degrades the quality-of-life for all our residents,” said Representative Rich Collins. “Turning the tide on this pervasive problem is going to require a multi-faceted effort, which includes rallying public support.”

“The Partnership for the Delaware is thrilled that Governor Carney is launching a statewide litter prevention program,” said Kathy Klein, interim executive director for Partnership for the Delaware Estuary. “This effort supports our organization’s work to keep trash out of our region’s waterways through education and coordinated hands-on volunteer cleanup programs. We look forward to working with the governor and his team on this important initiative.”

“Delaware’s oceans, waves, and beaches will be cleaner if we can focus on preventing litter inland and upstream,” said John Weber, Mid Atlantic Regional Manager for the Surfrider Foundation. “Preventing litter in the first place and cleaning it up where you see it is the best way to keep Delaware Beaches clean.”

“The Delaware Sierra Club commends Governor Carney for recognizing the need to educate the public on this important anti-litter campaign. Delaware’s waterways and beaches are too important to be polluted by litter. We thank the Governor for taking this first step toward protecting our water and our tourism economy,” said Sherri Evans-Stanton, Chapter Director, Delaware Chapter of the Sierra Club.

“MERR is very heartened that Governor Carney is taking this important initiative to stem the overwhelming problem of litter, which often ends up in the ocean and other waterways in the form of marine debris,” said Suzanne Thurman, Executive Director of the MERR Institute. “This debris has the potential to harm and even kill marine mammals and sea turtles when it is ingested or entangles them, and contaminates the marine ecosystem as plastics photo-degrade, causing toxic chemicals to enter the water column and other organisms such as fish.”