WHEREAS, the Board of Election has tallied the election results of the August 3, 2019 election and do HEREBY declare the following results:

THEREFORE, the following four (4) candidates are declared elected to fill the four (4) vacancies:

Congratulations to the winners, and we would also like to thank Julie Lee and Roy Williams for there many years on the Town Council. 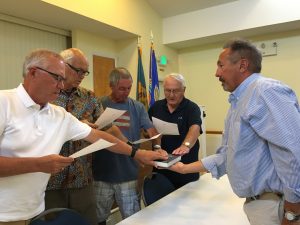 Swearing in ceremony performed by Secretary Merritt (from left to right):